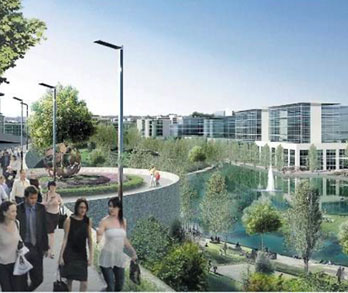 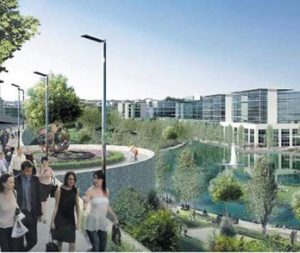 The Advertiser last week revealed the proposal for the first stage of a business park had been supported by Campbelltown Council.

The 60-hectare precinct — which will go on public exhibition — would be located on the Maryfields site, to the south surrounding the current University of Western Sydney and TAFE campuses and also include land near Farrow Road.

Stage one — the Nexus Business Park — only includes land on the Maryfields site, although council was hopeful the entire precinct would come to fruition.

“One of the hopes is to attract educational, medical and health [industries] and any businesses that relate to those industries,” Cr Lake said.

“Campbelltown will have a regional hospital as we go forward; we just signed off on the [$16 million UWS] medical school [to be built next to Campbelltown Hospital], and we also have the school of medicine at the university.”

Cr Lake said Macarthur could be the major medical precinct between Sydney and Canberra.

“We could have a new children’s hospital that services the south-west region down to Canberra,” he said.

The historic Stations of the Cross will remain the focal point, but will be complemented by the environmental heritage of the site.

Development planning director Wayne Camenzuli, on behalf of the religious orders, said the proposal, subject to Campbelltown Cou­ncil approval, was a long-time intent by the friars and nuns to re-establish their identity with an enhanced environmental centre.

The development would incorporate a centre, walkways over the Bow Bowing tributary and the possibility of opening up the “signature” dam to recreational use.

“What the friars and nuns would like to do is integrate the religious history with the environmental heritage,” Mr Camenzuli said.

“They’d like people to come and visit not just to experience the sense of pilgrimage but also the rich tapestry of flora and fauna.”

The two religious orders signalled their intention earlier this year to sell off excess land – about 12.7ha on Narellan Rd.

Subject to more environmental investigation and reports, the plan is to develop a business park as well as residential and seniors housing on the site.

HISTORY: Maryfields was a 52.5ha land grant made to Patrick Cullen in 1823

RELIGIOUS: Miss Sarah Mary Keane transferred the property to the Franciscan Brothers in 1930. The first Franciscan community moved to Maryfields in 1934

EMPLOYMENT opportunities will be one of the upshots with the development of the Maryfields site.

Planning director Wayne Camenzuli said that had been one of the main intentions of the Franciscan Friars when they decided to go ahead with plans to develop the property.

“They realised Campbelltown didn’t have a business park, and with the population growing and needing more employment this would be a good fit,” Mr Camenzuli said.

He added the Franciscan Friars and Poor Clare nuns would “absolutely remain” on the site.

“All they are simply doing is finding a sensible and ­rational use for the excess land they don’t use,” he said. “They also wanted to do something to leave a longer-term legacy for the community.”

Mr Camenzuli said any development was at least two years away. He anticipated artists’ impressions of the park would be available in a couple of months.